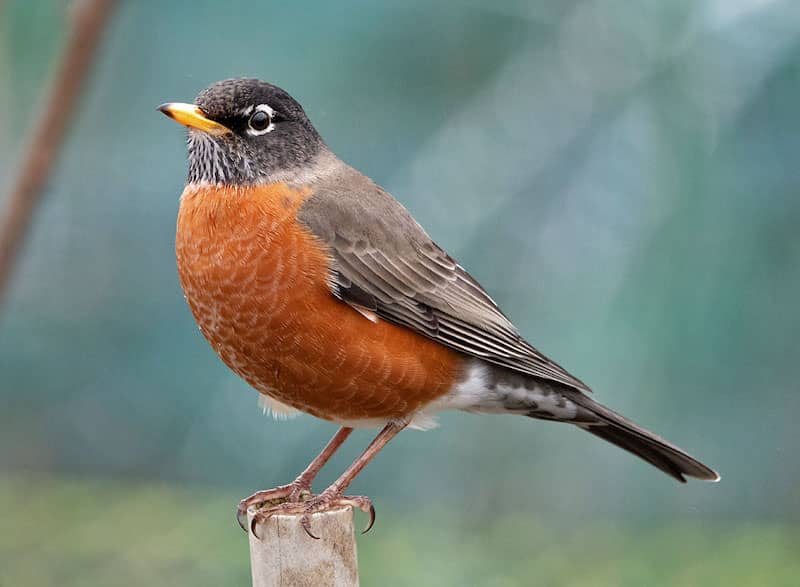 When you are out birdwatching, one of the first things you need to be able to do is correctly identify the birds you see.

This can sometimes be tricky, especially when two birds are very similar in appearance, like the American robin and the Northern cardinal.

These two species are often confused with each other because they have similar coloring and their songs sound quite alike.

Robins are a type of thrush, while cardinals belong to the finch family. Robins are slightly larger than cardinals with long tails and bigger feet.

Both robins and cardinals are found throughout the continental United States.

Despite their similarities, these two birds are not related and several key differences can help you to identify them.

Read on to learn more about the American robin and the Northern cardinal so that you can tell them apart the next time you spot them in your local area.

In the following sections, we will give you in-depth info on some more differences between these two species. These differences will allow you to quickly identify between cardinals vs. red robin.

Both male and female American Robins have grey-brown feathers on their backs, but the males have darker heads, while the females’ heads are lighter in color. The underparts of both sexes are orange, but the males’ orange is usually brighter.

In flight, American Robins have a white patch on their lower belly and underneath their tail that can be quite noticeable.

Cardinals also differ in color between the sexes. Male cardinals are a brilliant red all over, while females are more of a pale brown with warm reddish tinges in their wings, tail, and crest.

Both male and female cardinals have black faces with red-orange bills. Cardinals are also usually slightly smaller than American Robins.

Moreover, robins have much longer tails than a cardinal’s stouter tail. When it comes to bill size, robins have longer and thinner bills, while cardinals have shorter and thicker bills. Cardinals usually have a crest on their heads, while robins do not.

A robin’s lifespan is considerably shorter than a cardinal’s, on average. Whereas a cardinal may live for three to five years, a robin’s lifespan is only 13 months. The difference is that robins have high mortality rates in their first year, while cardinals do not. Once a robin survives its first year, it has a much better chance of living for several more years. The record for the longest-lived robin is 19 years.

The American robin is mostly active during the day and often flocks together with other robins at night. They also have a habit of flicking their tails downward when alighting. In contrast, Northern cardinals tend to sit low in shrubs than in large flocks. Furthermore, males of the cardinal species can be aggressive when defending their territory-something that is not typically seen in robins.

Nesting place- Like to nest on or near the ground, in hidden cavities such as hollows, nooks, crannies, and nest boxes.

Both birds eat a variety of fruits and seeds, but there is a difference in the types of insects that they eat. Robins mainly eat earthworms and other insects, while cardinals eat mostly seeds and fruit. Cardinals will also eat some insects, but they are not as common in their diet as they are for robins. It is also said that robins may try to round out their diet by selectively eating fruits that have bugs in them.

Robin’s song is typically a string of 10 or so clear whistles assembled from a few often-repeated syllables. In contrast, the Cardinal’s song is a loud string of clear down-slurred or two-parted whistles that lasts for 2 to 3 seconds.

The robin also has a sharp yeep or peek call that is used as an alarm, while the cardinal has a softer took note that is typically used when one bird is about to feed the other.

Female robins build their nests from the inside out, using dead grass and twigs to create a cup shape by pressing them with the wrist of one wing, while cardinals crush twigs with their beaks until they’re pliable and then use their feet to bend the twigs around their body and push them into a cup shape.

In addition to grass and twigs, robins may also use paper, feathers, rootles, or moss to build their nest, while cardinals typically use grapevine bark, grasses, stems, rootlets, and pine needles. Once the nest is built, robins reinforce it using soft mud gathered from worm casting to make it heavy and sturdy.

Robins have sky blue or blue-green eggs that are unmarked, while cardinals have grayish-white, buffy white, or greenish-white eggs that are speckled with pale gray to brown.