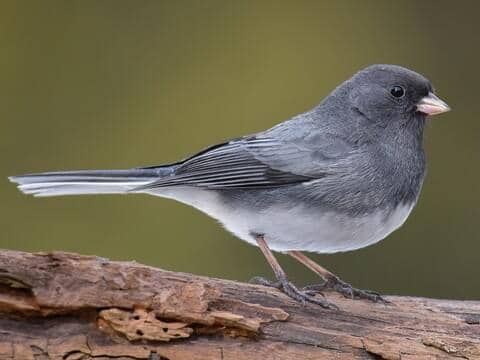 The dark-eyed junco and black-capped chickadee are two of the most common songbirds in North America. Both species are small, so they are often overlooked.

For one thing, dark-eyed juncos tend to be a bit bigger than chickadees, with a longer tail and a stouter bill. Their plumage is also generally darker, with less white on the wings and tail.

In addition, juncos tend to forage on the ground, while chickadees are more likely to stay up in trees. Though they may look similar at first glance, there are plenty of differences between them.

Let’s see what are the interesting things about these two birds – Junco vs Chickadee and know more about their lifestyle.

Junco vs Chickadee: Coloration and structure

Junco and chickadee are small, sparrow-like birds with striking colors. The body of the Junco is mainly gray or brown in color with a white belly and outer tail. The pink bill with black eyeballs gives them a brighter look.

The chickadee is slightly smaller than the junco and has a more complex color pattern. The back is grey-black, the cheeks are white, the cap and bib are black, the belly is soft fluffy white and the wing feathers are slightly brownish, which darkens along the edge.

Both birds are short-bodied and have long square tails. Junco’s wings are relatively long and pointed, in addition to a thick and cone-shaped bill.

Whereas, the wings of chickadees are shorter and more pointed, and their bills are small and more slender. The neck is short and the head is big which gives them a different look.

Junco vs Chickadee: Size and lifespan

Whereas, both birds live between 3 to 12 years

These small birds are constantly on the move in search of food or in search of building nests. They are common backyard visitors and are often seen together.

But their eating behavior is completely different; Chickadees are more likely to use their beaks to hammer open seeds or nuts, while juncos usually pick them up with their bills.

Junco is mainly known for its habit of “jumping and running” in search of food that has fallen on the ground or on the lawn. And they can suddenly be seen everywhere when the first snowflakes fall.

While the chickadee is known for its acrobatic flying. They fly up to the trunk of trees and bite the bark with their beaks.

It is thought that this behavior helps birds find insect larvae to eat. They were often seen flying bouncy in open ground or while crossing the road.

Chickadee’s native place- In North America from the East coast to the west coast and from Canada to Mexico.

Favorite place- Mixed and deciduous forest, open woodland, especially fond of trees with smooth thin branches, and are common visitors in willow thickets as well as in feeders.

Juncos and chickadees eat a variety of seeds, fruits, berries, or insects. They consume different types of food as their diet changes with the change in season and availability of food.

Junco’s diet- 75% of their diet consists of chickweed, buckwheat, sorrel, sunflower seeds, or millets. During the breeding season, they eat butterflies, moths, ants, caterpillars, and flies.

Chickadee’s diet- In summer, spring, and fall 80-90% of their diet consist of insects. In winter they mostly eat seeds, berries, or suet.

One of the most distinctive features of these birds is their song, which can vary greatly in both volume and length.

The Junco’s song is much louder, carrying for several 100 feet, while the chickadee’s song is relatively quiet and only carries for about 40 feet.

Additionally, the junco’s song is a trill of 7-23 notes that last up to 2 seconds. Both sexes also sing a much quieter song, a series of whistles, trills, and warbles that may sound like American Goldfinch.

while the chickadee’s song is a simple, pure 2 or 3 notes whistled fee-bee or hey, sweetie.

The calls of juncos and chickadees may both be high-pitched and musical, but there are some important differences between them.

Juncos often give a short chip note when they fly or forage, which may help to encourage other juncos to follow them and makes a fast, high twittering call when they sense the presence of a predator.

In contrast, chickadees usually make their chickadee-dee-dee call using increasing numbers of dee notes when they are alarmed.

The difference between both birds’ nests begins with the excavation process. Female junco uses their beaks to weave together materials while relying on their body to give the nest its shape. The material they use are grasses, pine needles, twigs, leaves, and moss.

Chickadees, on the other hand, excavate a cavity for the nest chamber. the chamber is usually hidden within a cup-shaped nest built by the female. They use rootlets, fur, and fine pieces of moss. Finally, juncos rarely reuse nests while it is common for chickadees to reuse theirs.

Junco’s eggs are white, grey, pale bluish-white, or pale-greenish speckled with brown, grey, and green. sometimes with no dots or marks.

Whereas chickadee eggs are white with fine reddish-brown spots.

Another difference is that the juncos egg is smooth, and slightly glossy while the chickadee’s egg has a rough texture.

These little birds are fun to watch as they hop around on the ground looking for food. you might see them in your yard, or at parks. They join mixed flocks with sparrows and kinglets.

So, if you see a group of birds that includes juncos and chickadees, there’s a good chance you’ll also see some other types of birds too. Keep your eyes peeled and see what kinds of birds you can spot in your area!