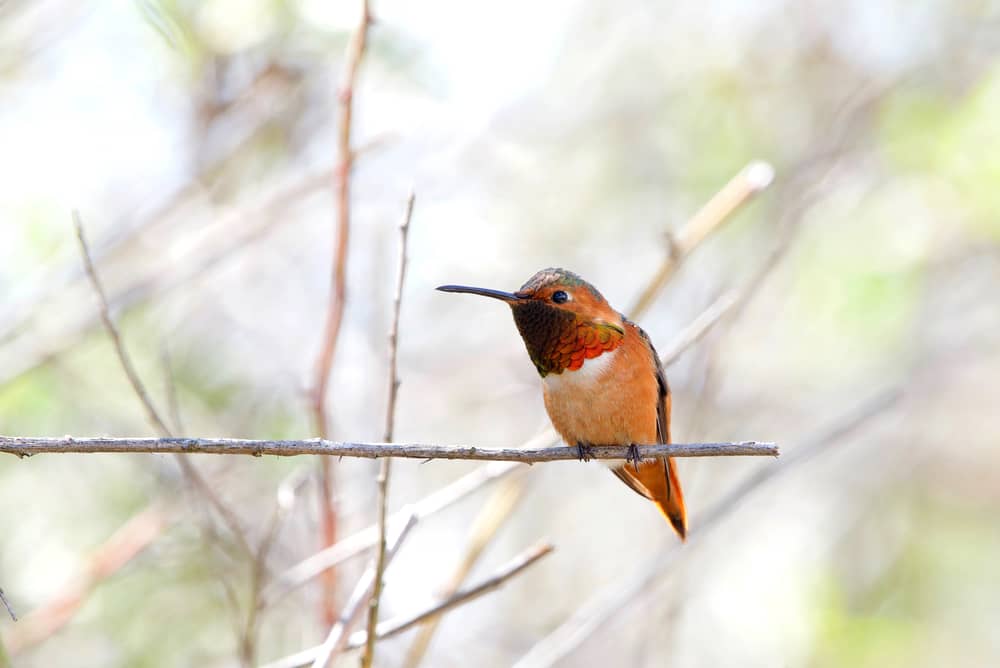 6 Types of Hummingbirds in Wisconsin

Wisconsin is considered the home of various kinds of hummingbirds. Here you can find different species of hummingbirds like Ruby-throated, Broad-Billed, Anna’s, Violetear, Allen’s, and Rufous hummingbirds, etc.

In Wisconsin, hummingbirds can be found in a variety of habitats, including forests, wetlands, and even urban areas. These energetic little birds require a lot of food to fuel their high metabolism, and they feed on nectar from flowers as well as small insects.

Did you know, that there are more than 340 species of hummingbirds, and they are found in every part of America? Or do they have the highest metabolism of any animal on Earth? Here are a few more amazing facts about these birds.

Without any further delay let’s see what are those six hummingbirds that are seen most frequently in Wisconsin:

The Green Violetear Hummingbird is a beautiful iridescent bird found in gardens and forests throughout Mexico and Central America. It is occasionally in Wisconsin.

The male bird has a shining green feather on its back and head, with a violet-blue throat. The female is similar, but her throat is white with green steaks. Both sexes have a long, curved beak that they use to feed on nectar.

These birds are fast flyers and can reach speeds of up to 30 miles per hour! They are also excellent hovering birds and can stay in one spot for several seconds at a time.

The Green Violetear is a small bird, measuring only around 3-4 inches in length.

They feed on nectar from flowers, using their long bill to reach into the depths of the flower. It also eats insects, which it catches in mid-flight.

These birds are known for their loud, high-pitched calls, which can often be heard before the bird is seen.

The Rufous hummingbird is a small bird measuring up to 3 inches in length and the second most widespread hummingbird seen in Wisconsin after the Ruby-throated hummingbird.

The Rufous hummingbird is a migratory bird and can often be seen in gardens and parks.

This bird gets its name ‘Rufous’ from its rufous-colored feather with green on its back and tail, while the female is typically paler in color.

During mating season, the male puts on an impressive aerial show, diving and zig-zagging through the air to attract a mate.

These birds are particularly fond of bees and wasps. Besides, they also feed on nectar-producing flowers including elderberry, fireweed, and tiger lily.

In the fall, Rufous hummingbirds migrate south to Mexico and Central America where they will spend the winter months. These birds typically return to Wisconsin in early spring.

Allen’s hummingbird is a small bird found in the Western United States and Mexico. This bird is named after Charles Lane Allen, who was the first person to collect a specimen of the species. Male have greenish-black upper parts and a red gorget (throat patch), while females have greenish upper parts with white streaks. They measure up to 3-3.5 inches in length.

Despite their small size, hummingbirds are very fierce little creatures. Given their tiny size, you wouldn’t think that hummingbirds would need much food but they actually eat about half their body weight in food every day. And most of that food is sugar-nectar from flowers.

If you’re trying to attract these tiny amazing birds then attract them by feeder also plant nectar-producing flowers in your backyard that they are fond of, this will surely help you to attract them. Because hummingbirds need to visit hundreds of flowers every day.

If you’re lucky enough you can spot one of these amazing tiny birds in your backyard or in the feeder.

There are over 300 species of hummingbirds in the world, with around 20 different species that can be seen in the United States among these, some of them make an appearance in Wisconsin.

Now that you know some facts about hummingbirds, keep your eyes peeled next time you’re out birdwatching! you might just spot one of these tiny treasures.