The origin of the name ‘unkindness’ for a group of ravens has a curious past. It is believed to have originated in the 19th century when people observed that ravens didn’t seem to demonstrate much concern or nurturance towards their young.

Contrary to what 19th-century folklore might suggest, ravens are actually gentle and caring parents who rarely expel their young before they’re ready to face the world. Ravens are highly intelligent birds that form tight family units and care for their young with dedication, spending a great deal of their time nurturing and training their chicks.

Ravens have captured human attention throughout time and are deeply embedded in our mythology. In many cultures they are associated with bad luck and even seen as tricksters, leading to the phrase ‘an unkindness of ravens’. In some European cultures, it was also believed that hunting a raven would bring misfortune – adding another layer of superstitious warning!

Collective nouns for a group of ravens

Why do the ravens get such a bad reputation?

Ravens are one of the most misunderstood creatures in nature, as they have been connected with death and dark things for centuries. Even now, when people see a raven soaring across the sky, their first thought is typically dread or mystery. This is mainly due to their black feathers and intense gaze that can be quite intimidating. Additionally, an important factor behind this mysterious connotation are the birds’ scavenging habits. Ravens tend to frequent areas near corpses in search of food, making them much more visible around places where death is present. These birds are also heavily connected with Halloween due their link to all things dark and death.

Ravens are quite remarkable birds, even compared to other intelligent species of birds. By having a brain relative to their size larger than most other bird species, ravens can do some truly astonishing feats. Aside from hiding and caching food for later, they have been found to be able to communicate with each other about what’s happening around them and have even been reported as being able to mimic human voices. These abilities make the raven a truly special species!

why is a group of ravens called a conspiracy?

A group of ravens is a strangely fitting name for the collective of these birds, aptly called a conspiracy. Given their communication and organizational structure, the mysteriousness and secrecy commonly associated with the words “conspiracy” is quite harmonious with their behavior – especially when observed in their large flocks. Raven jokes are abundant in our culture as well due to their mystique and curious behavior, so it’s only logical to assign them such a telling name. They feed off of secrets, secrets they may or may not tell one another in chattering assemblies. 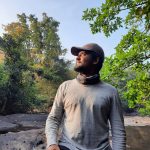 I'm a wildlife Conservationist, certified scuba diver, and photographer. I have a graphic designing background, i wish to explore ways to connect art to empower conservation. I love4 storytelling through my photograph and illustrations. My interest lies in studying Marin ecology, animal behavioral studies, and documenting natural history.