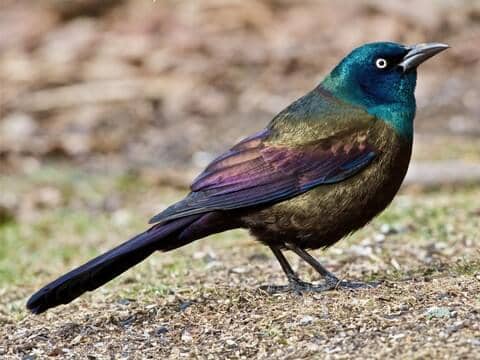 There are a handful of things as soothing as the sound of birdsong in the morning. For many of us, birds are simply creatures we see flitting about in our gardens or at the park, but there is so much more to know about these wonderful avian species. Today, we’re going to showcase you two different kinds of birds with a similar look i.e, Grackles vs Starling, but they are actually not the same. So without further ado, let’s get started.

Here’s a short video of Grackles and Starlings

Are Grackles and Starling the same bird?

Though they may look similar at first glance, grackles and starlings are actually two different species of bird. Common Grackle is a member of the Troupilas and Allie’s family whereas, Starling is part of the Starling family.

Although these birds share many similarities, there are also some key differences between them.

Grackle almost looks like a crow from a distance, but when you look closer they have a blue or purple sheen from head to neck and bronzy black feathers. Medium size with a slightly curved beak and golden-yellow eye gives them an intent expression. Female grackle is similar in coloration to male but she lacks the glossiness of male. Besides, young birds are dark brown with dark eyes.

On the other hand, the color of starlings changes according to the weather. In summer the plumage of the starling looks glossy black with a purplish-green and has a yellow beak, but in winter feathers get brown or grey, covered in brilliant white spots. Male and females look very similar, but females tend to be brownish-black and have darker bills.

Grackle VS Starling: Size and shape:

Robin-sized grackle’s body is long and slender, with a long tail. The shape of the head is flat, with a pointed curved beak.

They are small to medium-sized birds with oval-shaped bodies and tapering at the head and tail. They have small legs and their wings are fairly long and pointed.

The common Grackle belongs to the family Troupials and Allies(Icteridae) which has 105 species of birds in it. They can be found in a variety of habitats across North and South America. Though they are most commonly found in parks, gardens, and even some urban areas.

Starlings are native to Europe, they were introduced into North America, South Africa, New Zealand, and Australia. You can see them nearby in parks, gardens, over trees, bushes, and feeders.

These birds are omnivores and are relatively unafraid of humans, and will often approach people in search of food. They eat what they get in the wild, mostly they like eating insects and seeds. When insects get scarce they change their diet to fruits and grain which they find in the feeders, garbage, etc.

Fruits, nuts, crickets, June beetles, caterpillars, millipedes, bread, cereal, crackers, etc. Grackles are known for being particularly adept at stealing food from picnics and campsites! While they can be a nuisance to humans.

This bird typically finds food by foraging on the ground or in trees. They mostly eat seeds, grains, nuts, legumes, fruits, insects, and vegetables.

The lifespan of these birds can be shorter or longer depending on the environment and care they receive. common Grackles are known to live for 22 years in the wild and in captivity for 17 years.

While starlings live shorter life ranging from 5-10 years. The oldest recorded starling was a captive bird in the United Kingdom that lived to be 24 years old.

Grackle VS Starling: Behavior and Sound

The sound of a grackle is one of the most distinctive sounds in the bird world. It is a harsh, guttural sound that is often described as sounding like a machine gun. They are often known for their loud, raucous calls, and they use these calls to communicate with other members of their flock.

Both sexes make a very short, harsh chaa or chitip call when taking flight, alarmed, or approaching other grackles.

On the other side, the sound of a starling is beautiful, melodious, and pleasant, depending on the individual bird. Some have been known to mimic the sound of other birds, while others make a more traditional chirping sound. They can wiggle, whist, chatter, make smooth fluid sounds, make harsh thuds and rattle noise, and can even be seen imitating grasshoppers, jays, and hawks.

It’s amazing to know both sexes can make 10 different kinds of calls to communicate, for example, alarm calls, where they are, how aggressive or agitated they feel, when to take flight, etc.

Migration is a natural process that happens when birds travel to different locations because of changes in the environment. For grackles, migration typically occurs in late autumn, just before the weather starts to get cold. They fly to the southeastern United States where the weather is warmer and there is more food. These birds travel in large groups called flocks. This makes it easier for them to find food and avoid predators.

But some grackle species do not migrate and survive the winter.

Most starlings are residential birds in the UK, although some are migratory. Each autumn, these birds travel from their breeding grounds in northern Europe to their wintering grounds in southern Europe during September and October and return home during February and March.

Do Grackle and Starling flock together?

One of the most mesmerizing things to watch in nature is the way that some birds seem to magically fly in unison. While it might look effortless, group flight is a complex process that requires split-second timing and coordination. So, do grackles and starlings flock together? The answer is yes! These two types of birds are often seen flying together in large groups. One reason for this is that they share a common habitat and tend to eat similar foods. When they fly together, they can communicate and collaborate more effectively, which helps them to find food and avoid predators.

Interesting and unknown facts about Grackle and Starling: